The outbreak of the Covid-19 pandemic caused that for the first time after 1989 (democratic transition in Poland), the armed forces became involved on such a large scale in an anti-crisis operation. As part of these activities, soldiers of Polish Territorial Defense Forces played an important role. This newest branch of Polish Armed Forces was the first to become involved in supporting people in need, authorities, health care system and many other institutions. The aim of these activities is to mitigate the effects of the pandemic and to strengthen the resilience of people in the local communities.

The aim of the operation is to mitigate the effects of the pandemic crisis and to strengthen the resilience of people in the local communities. All tasks are conducted in the form of supporting states (voivodes) and local authorities (county, township), aid institutions and direct support in seven main areas: 1) hospitals and medical services; 2) law enforcement; 3) Strategic Stockpiles Agency; 4) Border Guard; 5) local authorities and NGO’s, 6) Civil Aviation Authority; 7) building individual and social resilience.

Based on the decision by the Minister of National Defense, cadets of the military academies were assigned to support the activities of TDF. Specialized units (CBRN and Medical Corps), typically structured under the Armed Forces General Command, were delegated to tasks requiring their specialized skills and equipment. Military Police and the Inspectorate for Armed Forces Support also participated in operation. 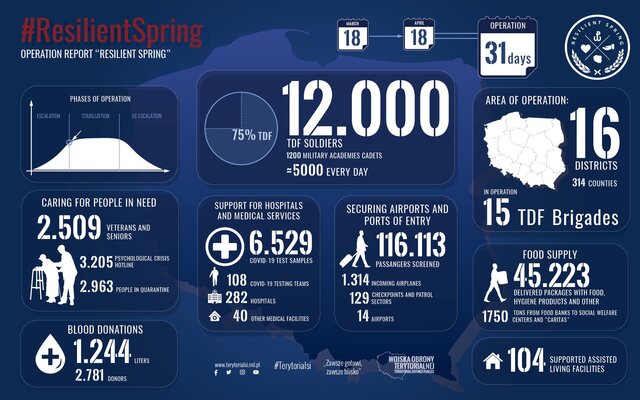 There were around 5500 troops from TDF and military academies involved every day in “Resilient Spring” operation. 75% of TDF soldiers on orders are volunteers (traditional soldiers). In the first month of the operation, over 12000 TDF troops were involved in the activities. which constitutes 50% of the force.

Area of support no. 1: hospitals and medical services

It is one of the most strategic fields of “Resilient Spring” operation. These actions are focused on supporting first-line staff, fighting with coronavirus. In the first month of operation TDF soldiers supported 282 hospitals, 40 other medical facilities and 32 isolation units. 108 teams collected 6 529 samples for covid-19 testing. TDF troops and cadets widely engaged in supporting medical care system. They conducted reverse triage, temperature checks and screening of patients and medical staff, put up tents and containers used as field emergency rooms, and collected samples for covid-19-testing – both stationary and mobile at quarantined persons place of residence. TDF soldiers and cadets donated significant amount of blood, which was especially needed at the beginning of the crisis. In the first month of the operation, 2 781 people donated 1 244 blood liters through national blood donation organization. An important task was also to care for medical personnel families, upon request and in cooperation with National and State Chambers of Nurses.

Area of support no. 2: building individual and social resilience

The first task undertaken by TDF soldiers in this area was to help WW2 combatants. Support began on March 6th. In total, over 2500 combatants and the elderly were taken care of. Also, almost 3000 quarantined people were included in this mission.

A 24/7 nationwide tollfree helpline was launched to provide support for lonely, elderly, and people struggling with isolation. In the first month of “Resilient Spring” TDF psychologists took over 3200 calls.

Area of support no. 3: local authorities and NGO’s

TDF soldiers along with cadets supported local authorities. They distributed 1750 tons of food from Food Banks to social welfare centers with help of “Caritas” (the largest NGO in Poland). Troops delivered 45 233 packages with food, hygiene products and disinfectants directly to people in need.

Military University of Technology was leading development of an app used in supporting local authorities, health departments and medical institutions with direct electronic communication between care centers in the entire country and TDF to enable quick reaction for critical issues. There were almost 800 facilities registered in the app and over 100 requests addressed every day.

As part of operation “Resilient Spring”, TDF soldiers and cadets also supported the activities of the National Stockpiles Agency (ARM). Starting from the unloading of transports arriving to Poland with medical and hygienic products, through their placement in warehouses, to transport to hospitals, health care facilities and local authorities throughout the country. In the first month of the operation, in 319 convoys they transported 3 375 tons of goods to 1 698 points of distribution.

Increased number of people in quarantine and implementation of further restrictions resulted in the need of providing support to the law enforcement. At the height of operation, these activities consumed nearly 50% of TDF troops deployed for operation “Resilient Spring”. TDF soldiers supported police by augmenting their routine patrols and quarantine monitoring activities.

Area of support no. 6: cooperation with Border Guard (task completed)

Restoration of boarder checkpoints, including road closures resulted in personnel shortage requiring army to support the activities of the Border Guard. TDF soldiers assisted in the organization of checkpoints and ports of entry, as well as logistical support for people crossing the borders. Over 1 300 TDF soldiers participated in this task. At the height of operation, they assisted at 129 checkpoints and patrol sections. Soldiers of the 7th Pomeranian TDF Brigade additionally supported the marine port of entry, where they pre-screened travelers incoming on 17 ferries.

At the request of the President of the Civil Aviation Office, TDF soldiers were also directed to 14 airports. Their activities consisted of conducting temperature checks and screening travelers and citizens returning to Poland and collecting travelers’ information cards. In total, TDF troops checked 116 133 travelers on 1 314 aircraft. Most of these activities were carried out at Warsaw “Chopin” Airport by soldiers of the 6th Mazovian TDF Brigade.

The above-mentioned fields of activity do not represent all forms of support provided by TDF soldiers under operation “Resilient Spring”. TDF troops often joined the initiatives of manufacturing PPE products, supported in office activities or construction and finishing jobs. TDF prepared quarantine locations, supported scouts and the Polish Red Cross, served as process servers for local health department and printed and put up information posters and leaflets. The key of the operation was to not leave the people in need without support. Additionally soldiers provided feed for animal shelters to include an equestrian sanctuary.

All examples of the TDF activities mentioned above are a living proof of the mission, which defines to defend and support local communities.

Their capabilities respond to the current threats which must be addressed by Poland and the NATO. Territorial Defense Forces showcase social responsibility for the common and priceless value - security. TDF consist of professional soldiers and part-time soldiers – volunteers, who join military service in order to enhance national defense capabilities and protect their local communities.

By creating Territorial Defense Forces Poland increased the national ability to defend the country from any attack by any potential aggressor which is in line with the NATO standards for building own defense capabilities of the Alliance member nations (NATO Treaty Art. 3).

Main tasks of the Territorial Defense Forces are in line with Polish Armed Forces missions described in the National Defense Strategy, and therefore include:

Thanks to the app developed by cadets from Military University of Technology, TDF soldiers were able to reach with support directly to the locations, where help was needed the most

Thanks to the app developed by cadets from Military University of Technology, TDF soldiers were able to reach with support directly to the locations, where help was needed the most

TDF soldiers assisted many people on quarantine orders, at their residence, by supplying food items and necessary prescription medications

One of the TDF tasks, was collecting samples for testing and pre-medical surveys by specially trained soldiers

In response to the needs reported by the national blood donation organization, TDF soldiers organized and participated in blood drives in many locations across the country